Hey everyone, welcome to Dynamically Typed #49! Today’s productized AI feature story is on autonomous trucks, which is where I think self-driving vehicle tech will have its first big impact; I’ve also got quick links to Facebook’s survey paper on AI systems for social network safety; and an ECCV workshop on fair facial recognition systems (spoiler: they’re still not fair).

For ML research, there’s an update to Microsoft’s DeepSpeed training library; an essay that frames Transformers as Graph Neural Networks; a paper on how researcher experience impacts model performance; and the release of the NumPy paper! Finally, for climate change AI I found a tree planting location recommender system for reforestation; and for cool stuff there’s a new bioinformatics paper that can reconstruct images of what your eyes are seeing based on a scan of your brain.

Autonomous trucking is where I think self-driving vehicle technology will have its first big impact , much before e.g. the taxi or ride sharing industries. Long-distance highway truck driving — with hubs at city borders where human drivers take over — is a much simpler problem to solve than inner-city taxi driving. Beyond the obvious lower complexity of not having to deal with traffic lights, small streets and pedestrians, a specific highway route between two high-value hubs can also be mapped in high detail much more economically than an ever-changing city center could. And, of course, self-driving trucks won’t have the 11-hour-per-day driving safety limit imposed on human drivers. This all makes for quite an attractive pitch when taken together.

“They are going to help us make sure we build the right product, and we are going to help them prepare to adopt it and be successful,” said Mr. Woodrow, who worked on self-driving trucks at Uber Technologies Inc. before co-founding Ike in 2018.

Unlike rival startups, Ike wants to be a software-as-a-service provider of self-driving tech for existing logistics operators, instead of becoming one themselves. It’ll be interesting to see how well this business model works out when competitors start offering a similar service — the biggest question is how easy or hard it’ll be for an operator to swap one self-driving SaaS out for another. If it’s easy, that’ll make for a very competitive space.

(On the disruption side: there are nearly 3 million truck drivers in the United States alone, so widespread automation here can be quite impactful. Until today, I thought trucking was the biggest profession in most US states because of this 2015 NPR article, but apparently that was based on wrongly interpreted statistics; the most common job is in retail — no surprise there. Nonetheless, trucking is currently a major profession. A decade from now it may no longer be.)

Artificial Intelligence for the Climate Crisis 🌍 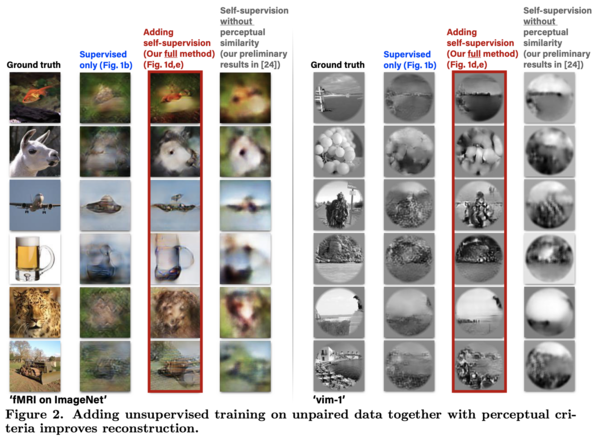 Today in cool stuff that’s much further along than I thought it was: Gaziv et al. (2020) developed a self-supervised approach to fMRI-too-image reconstruction — generating pictures of what your eyes are seeing from a brain scan. Their main contribution is this self-supervised aspect: they pretrain their decoder on unlabeled ImageNet data, of which there is much more available than the fMRI-image pairs that previous work exclusively used.

Their results are good enough for a human to recognize e.g. a glass of beer or an animal (see above), which were reconstructed from fMRIs without having been in either the pretraining or fMRI datasets! Check out Figures 1 and 2 in the PDF on bioRxiv for more examples.

Thanks for reading! As usual, you can let me know what you thought of today’s issue using the buttons below or by replying to this email. If you’re new here, check out the Dynamically Typed archives or subscribe below to get a new issues in your inbox every second Sunday.

If you enjoyed this issue of Dynamically Typed, why not forward it to a friend? It’s by far the best thing you can do to help me grow this newsletter. 📓

Join 325+ others and subscribe to get DT in your inbox every second Sunday — 76 issues and counting!

Climate change prevention and adaptation projects that use AI.

Art projects and visualizations built with and around ML models.